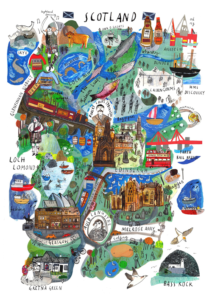 Believe it or not the earliest maps ever made were not of the earth but of the stars. Quasi maps or oblique projections are among the earliest forms of map, but today almost all maps are drawn as if we are looking down from the sky. Peter’s projection in the last century famously ruffled a few feathers by implying that until then most official map projections emphasised the Northern and Southern hemispheres making Africa, the far East and South America look smaller.

Perspective is everything in map making. Scotland Mapped Out in the time honoured tradition of early map making is idiosyncratic, eclectic and impressionistic. You would not use it to navigate. For it is a whimsical take on all things Scottish, as seen through the lens of a tourist. Those distortions whether intentionally or not reflect the way that Scotland’s tourism is often presented to the world. Tourism actually contributes around £9b to the Scottish economy (5% of GDP), with over 200 thousand jobs supported. You should hear what people outside Embra have to say about how this is concentrated in the South East! But that is another story.